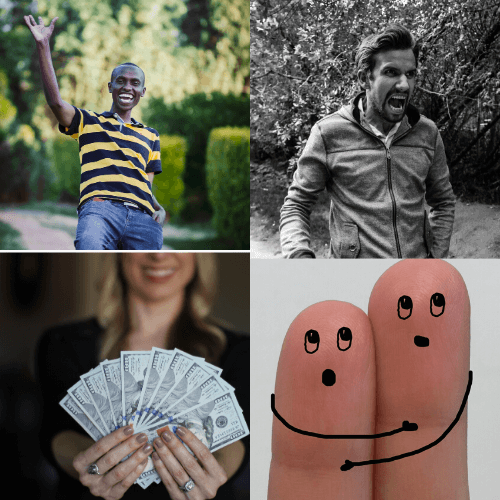 #How To Use Emotions In Stock Market To Your Advantage

Emotions in stock market are often considered bad for your investment decisions.

What if I say that emotions like Fear and Greed are not bad when it comes to investments in stock market. After all they are perfectly normal emotions that arise in all living beings alike.

But Why do I say that emotions are not bad in stock market? Well. This question will be answered in a short while through an example of an investment I had made in 2013.

In past 6 and a half years of full time equity investing, I have experienced emotions like fear, panic, anxiety, greed, anger and even attachment to stocks multiple times. Even my temptation to sell a stock and instantly gratify myself has been tested many times over.

Folks. Even the best of Chartered Accountants, MBAs and others with degrees in finance and economics find it difficult to make money in stock market.

The main reason for this is a lack of wisdom to accept and use our emotions to our advantage.

Therefore in this post I am going to share an investment story. A story which will show you some of the emotions an investor has to go through.

We will also see how an investor can leverage his/her emotions in stock market for being a successful investor. So stay tuned.

A Desire To Make Money

A desire to make more money and this desire itself seems to stem from an emotion of Greed.

In order to be in control of your emotions in stock market you need to first accept these emotions. That is why I have acknowledged my strong desire to make more money which is inspired by the emotion of greed in one way or the other.

La Opala RG is an Indian based tableware company whose products are made of Opalware glass.

Back then all I looked for in a company were rising sales and profit numbers, along with little debt and rising operating profit margins.

Therefore a look at the rising sales, profit and operating margins convinced me to buy this stock. Another thing that appealed to me was its declining debt to equity ratio.

Note: If you are new to the concept of debt to equity ratio then please click here to read more about it in detail

So here was a company which catered to the Indian consumer segment and was growing at a fast clip.

Soon after my first purchase of 500 shares by the end of Dec 2012 stock flirted with 280 Rs a share. As I watched the stock go up I was overwhelmed by emotions of excitement, greed, fear and anger at the same time.

Excitement because the stock was rising too fast. Greed as I wanted to buy much more of it Fear as I did not want to lose my gains and anger because I did not buy lots of it in the beginning at a price of 152 Rs a share.

I also experienced a temptation to book profits as the stock had almost doubled.

So what do you think I would have done at this point in time? Sold my shares, did nothing or bought more shares?

So I kept aside the emotions of excitement, fear, anger and chose Greed at this point in time.

But was my greed unfounded. Did it arise purely due to a surge of emotion or was it backed with facts?

I had become greedy to buy more shares of La opala as the company was reporting a sharp increase in sales and profit numbers.

This dear readers is an example of Greed used to the advantage of an investor.

My Learnings From This First Episode

Let us summarize my learnings from this episode:

1. When confounded with emotions in stock market like greed or fear please make use of facts to justify your actions.

2. Resist the urge to instantly gratify yourself by booking profits if the company is doing well. Your trait of patience gets tested in this scenario. 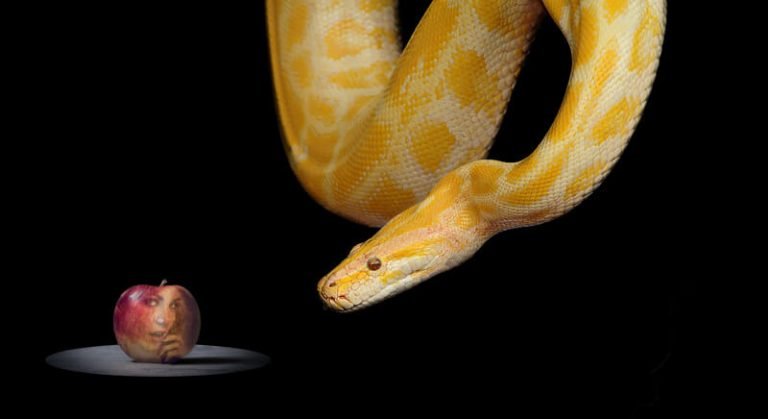 After the emotion of greed made me buy a lot of shares of La opala, I decided to follow Mr. Warren Buffet’s strategy of buy and hold.

Therefore I resolved to hold on to my shares as long as the company kept reporting strong financial numbers.

Please have a look at La Opala’s financial numbers from 2012 to 2016 below. Sales and profit numbers were growing rapidly. In fact the profit had more than quadrupled.

As the company kept reporting better numbers my conviction to hold only got stronger.

Even a rising stock can put your emotions to test. La Opala tested my patience to hold on to my stocks and resist the temptation to sell shares and gratify myself. 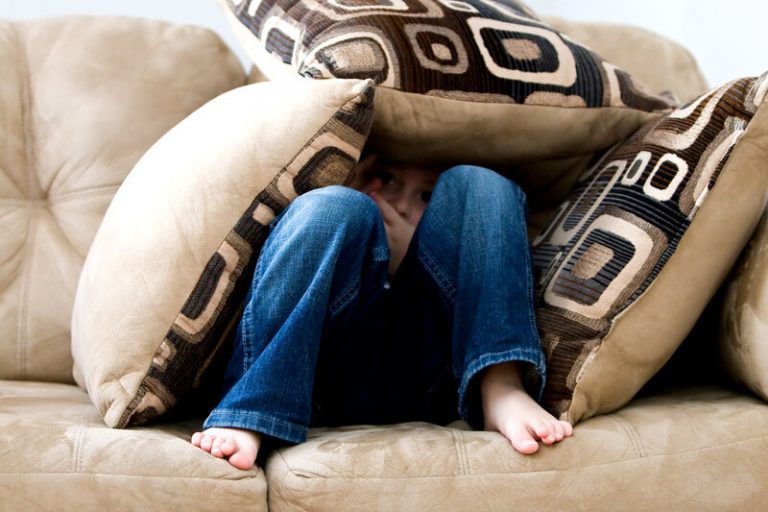 In May 2016, La Opala RG (Opal glass tableware manufacturer) a stock which I had been holding since 2013 reported a minor decline in its revenue of 12.1% while profit increased 33.6%.

While reading the research report from Nirmal Bang on La Opala RG published on 17th
May 2016, there was one statement that caught my attention

Nirmal Bang in their research report stated that La Opala had reduced the prices of Diva range (constituting 70% of sales) of opal tableware by 15%.

Simultaneously, company reduced promotional trade discount provided to dealers to 0% from 15%. La opala had done this to promote volume growth.

The reason why this statement is important is that La Opala was a dominant player in opal glass tableware in India. In the 3 years that I held the stock company never reduced the prices of its tableware products.

I immediately realized something was not right. Therefore I visited a few dealers to know the reason for this price reduction.

On inquiring I found out that Borosil (another Indian glassware company) had launched its opal glass tableware under the brand name Larah recently at competitive prices.

On searching the net, I found an article dated 14th Jan, 2016 which stated that Borosil Glassworks was acquiring Hopewell Tableware for 27.03 crores. Through this acquisition they entered the opal dinnerware business.

Confusion, Fear, Attachment Versus Logic Based On Facts

Over the next few days I had to decide whether to sell my shares or hold them. On one hand was my attachment to this multibagger stock which made me experience what upper circuits in stock market feel like.

It had been my cash cow that I longed for and in May 2016 I had to decide if I should part ways with La Opala or hold on to it.

On the other hand were hard cold facts:

c) Stock was trading at an expensive PE ratio of more than 50.

As an investor you can only look at facts and take a call based on facts in hand.

For me the stock was trading at an expensive valuation of a PE > 50 and the entry of Borosil in opalware market meant slowing growth of La Opala.

Did I Take The Right Decision?

My decision to exit La Opala was actually right as recently the stock hit a low of 1400 Rs and currently trades at a PE of 24.

Once Borosil entered opal glass tableware market, sales of La Opala have not been able to show any meaningful growth and the stock corrected to a more reasonable PE ratio.

Please see the stock chart below justifying my decision to sell La Opala in 2016. Please note that stock has been split. Therefore a price of 140 is equivalent to 1400 Rs. 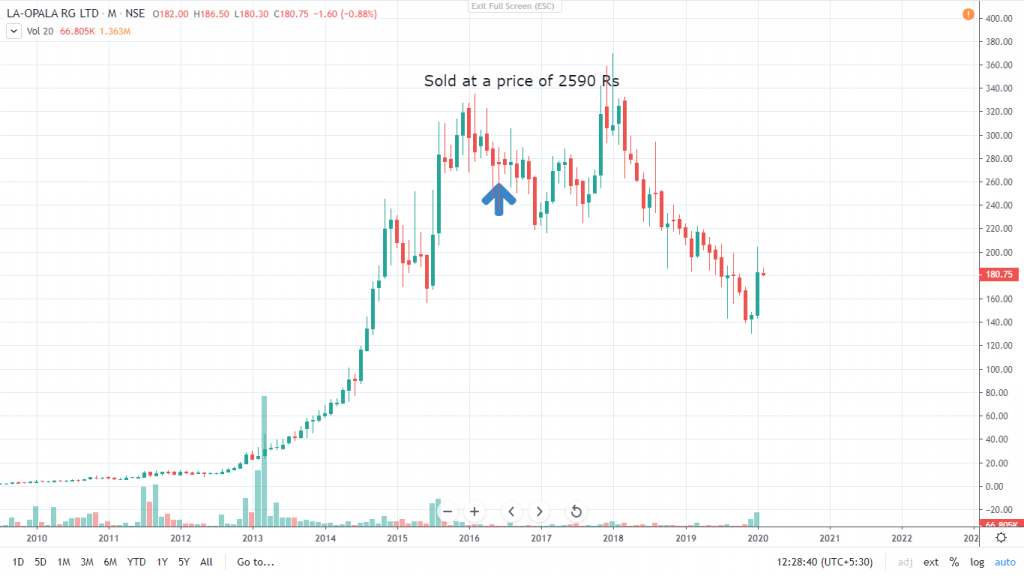 Few lessons that I learnt from my sell decision were:

1. Once things change an investor must change his mind. As in my case once I learnt about the entry of competition I decided to change my buy and hold strategy

2. Keep aside all emotions of fear, greed, ego or attachment and focus only on facts.

3. Once you act on your decision verify whether you were right in your assessment or not?

If not then there is no point in brooding over the past. Instead you need to learn a lesson and move on.

Yes all this is easier said than done but I have tried to do it and so can you.

Emotions in stock market can provoke us in to taking wrong decisions. Therefore before you decide to buy or sell based on emotions it is advisable to think rationally about the problem.

I am providing below some common scenarios that an investor may face during his investing journey, the emotions to be avoided and a possible rational solution

After all, Emotions in stock market are not as bad as people think. For example, fear keeps us on our toes.

It helps us prepare for a negative outcome. It is when you act impulsively without weighing the facts that it begins to hurt.

1. Please use emotions to your advantage. For this you need to first accept the emotion you are undergoing

2. Before you act impulsively under the influence of emotions in stock market, search for facts, assess the situation and then act logically

I hope you will find this article useful. If you have an interesting scenario where your life or stock markets tested your emotions then please feel free to share your experience and learning.

How To Customize Your Workspace On Screener.in For Analyzing Stocks Like A Pro

5 Characteristics Of A Multibagger Stock You Should Know About