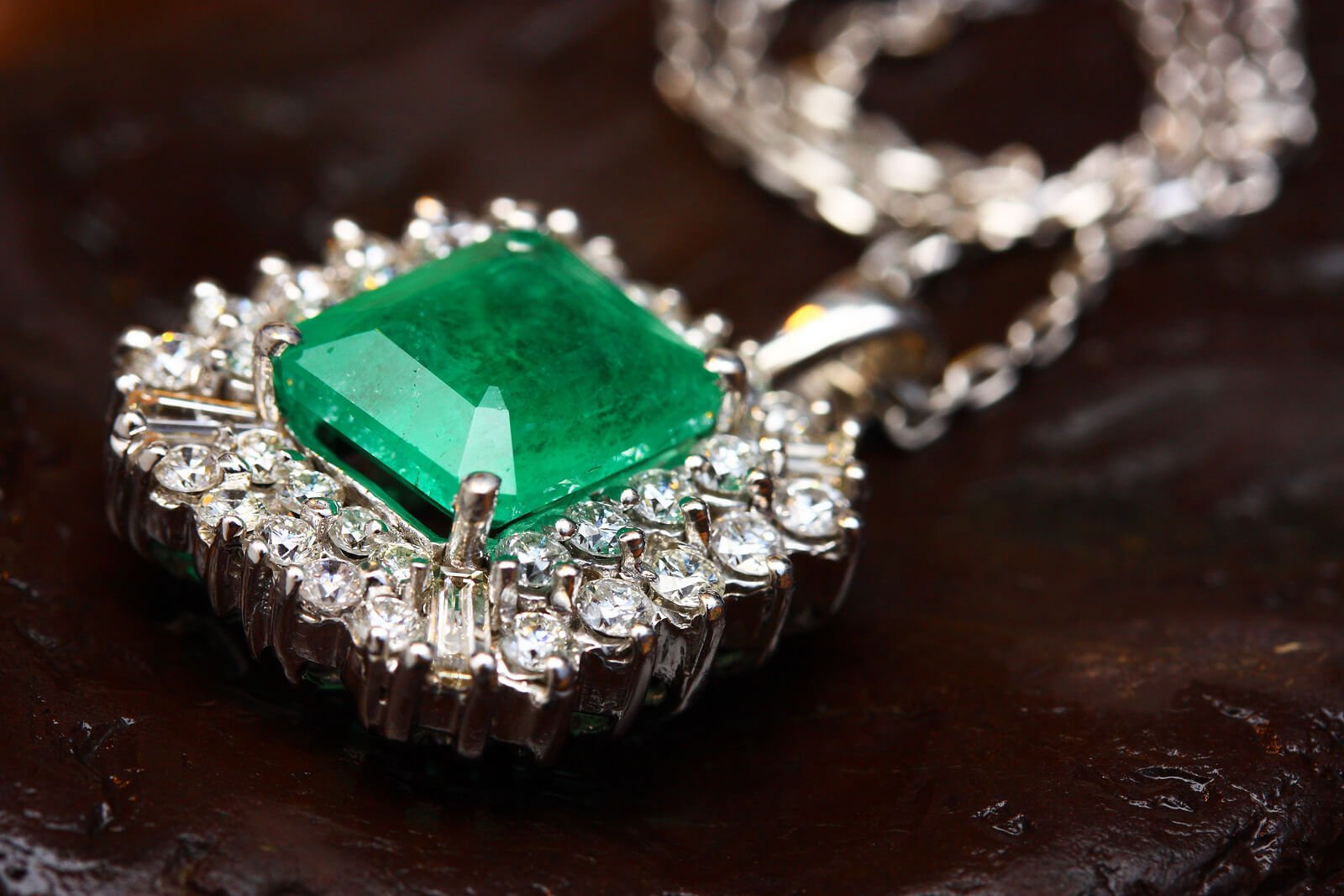 Gitanjali Gems headquartered in Mumbai,at one point of time was one of the largest branded jewellery retailer. It was the proud owner of brands like D’damas, Asmi, Nakshatra, Maya, The World of Solitaire etc.

Folks. This post is not about the fraud that unfolded in Gitanjali gems. Rather it is about the warning signs which raise suspicion about the conduct of Gitanjali Gems.

So go on and read 10 points that could have helped an investor avoid Gitanjali Gems stock crash. There is an additional point shared at the end that is quite trivial but I find it quite fascinating.

Interest coverage ratio measures the ability of the company to cover its interest payments.

From the data below we can see that Gitanjali gems’ interest coverage ratio has been on a declining trend and below the recommended threshold of 3 since Mar 09.

This means that majority of the operating profit made by Gitanjali Gems is going towards servicing its debt payments. A low ratio indicates a high probability a company will not be able to meet its debt obligations in future.

Before Gitanjali gems stock crashed from 600 levels in Apr 2013 to around 50 Rs a share by July 2013 this ratio alone should have alarmed an investor.

Even after 2013, the interest coverage ratio has only deteriorated from 2.35 in Mar 13 to 1.23 in Mar 17. What more evidence is needed to abandon this sinking ship?

Inventory turnover ratio is an efficiency ratio that measures how many times in a given accounting period a company is able to sell and replenish its entire inventory. It tells us how efficiently a company is manages its inventory.

Inventory turnover ratio varies depending on the industry a business operates in. A company selling perishable products will usually have a high turnover like a bakery or a sweet shop.

Then there are companies selling products which take time to sell. For example companies in real estate where the inventory of flats, villas etc needs to be held for longer period of time before they are sold.

A declining inventory turnover indicates that the company may be finding it difficult to sell its products in the market, due to less demand for its products or a slowdown in economy.

It could also be piling up excess inventory due to poor inventory management. This means that company’s cash is now stuck in its inventory. Unless this inventory is sold cash cannot be received.

The formula for calculating Inventory turnover ratio is as follows:

Cost of goods sold is the cost of making a finished product and is available in the profit loss statement of a company.

Let us look at the example of Gitanjali gems to understand this:

This means that ability of Gitanjali gems to sell its inventory of gold jewellery and diamonds at a faster pace has been declining. It is an indication of money getting blocked in inventory.

A look at the receivables to sales ratio of Gitanjali gems up to 2013 indicates company makes around 44% to 45% of its sales on credit to its customers or dealers.

Please note that receivables are sales on credit for which money is received on a later date and the number of days it takes to collect money for sales on credit are called debtor days.

A receivables to sales ratio of 44% in Mar 13 or 77% in Mar 17 is a very high number. There is a high chance that the company may face cash crunch in future as a lot of cash is getting blocked in receivables.

As of Mar 2012 (one year before the crash in 2013), Gitanjali gems had a massive amount of 5384 crores blocked in receivables. These receivables continued to increase to levels of 12,828 crores by Mar 17.

While we can see that Gitanjali gems has a high receivables to sales ratio it will only be prudent to check how many days it takes for the company to collect cash from its customers.

If we calculate the average debtor days from Mar 07 to Mar 13 (when the stock crashed) we can see that Gitanjali gems takes on an average around 169 days to collect cash from its customers.

This is a fairly high number pointing to money getting stuck in accounts receivables.

Please find below an excerpt from an article published in outlookindia highlighting the fact that Gitanjali gems inflated its sales numbers to create phony debtors.

According to the ED, the exports from Gitanjali Gems and Gitanjali Export Corporation were made to two Hong Kong based companies, M/s Trans Exim and M/s Tradewell Enterprises.
However, the payments for the exports were made by Hong Kong-based M/s 4C’s Diamond Distributors and M/s Shanyao Gong Si Ltd, resulting in an under reporting of actual exports to the beneficiaries of the LOUs and Foreign Letters of Credit (FLCs) that were obtained by Choksi and his aides, whereas over-reporting of exports to M/s Trans Exim and M/s Tradewell Enterprises.
The ED stated that Choksi adopted this modus operandi to manipulate transactions to avoid getting detected by banks or auditors, project inflated sales and turnover, to create phony debtors in the books of Gitanjali Gems to enhance credit limits, among other objectives.

5. Pledging Of Shares By Promoter

From the data below, one can see that as of Dec 2012 quarter, promoter had a total shareholding of 59% and out of this 37.29% shares were pledged by promoters.

I usually avoid companies with more than 10% of shares pledged by the promoters. In Gitanjali’s case a significant 37.29% of promoter shares a were already pledged as of Dec 2012.

This alone would have made me walk away from the company prior to the stock crash in April 2013.

Even if you invested post Gitanjali gems stock crash of 2013, say around April 2017 when the stock was quoting around 70 Rs; Pledge of shares by promoter to the extent of 79% as of Mar 2017 should have alarmed you as an investor

6. Percentage of Tax Paid Is Low and Declining

As per the data below, percentage of tax paid by Gitanjali gems from Mar 07 to Mar 2017 is well below the tax rate of 30% plus cess and surcharge applicable.

The percentage of tax paid has declined from 12% in Mar 07 to 4% by Mar 2013. Thereafter the company seems to be deferring tax payments due to which there is a negative tax rate from Mar 15 to Mar 17.

It is advisable to figure out the reason for such drastic reduction in tax rates.

As per the annual report company is eligible for tax benefits due to operating its facilities in special economic zones (SEZ) and is also availing the benefit of Minimum Alternate Tax credit (MAT credit) in certain years.

Despite the claims of company, the following excerpts from the annual report for financial year 2012 indicates that company seems to be under continuous scanner of income tax department

Below excerpt from the annual report also points out a disputed income tax of 21.24 crore rupees as of Mar 2012 (refer point b)

As seen below, Gitanjali Gems’ tax dispute with Income tax department has been ongoing since assessment year 2006 – 2007 and tax demands have been adding up. 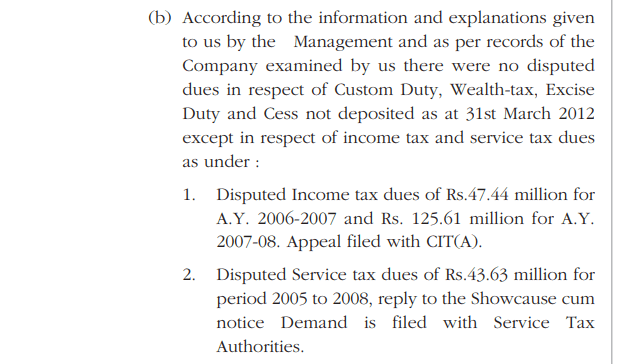 The tax demand from income tax department kept piling up. As per the annual report for FY17 the firm reported income tax liability of 534.76 crores that may arise for which company has filed an appeal with Commissioner of Income Tax.

Company also has a disputed service tax of 6.6 crores for which the company replied to the show cause notice.

It also has a show cause notice demand with respect to disputed excise of Rs 1.24 crores. These amounts may be insignificant in the overall scheme of things but they do raise suspicion of tax evasion.

Income tax searches, surveys, show cause notices do not speak well about the company.

As per the annual report for FY 2012, parent company, Gitanjali Gems seems to have provided corporate guarantees for Rs 2487.3 crores for working capital facilities availed by its subsidiaries. This is a lot of money for which the company is acting as a guarantor.

As per the annual report provided for financial year 2012 Gitanjali gems has a long list of subsidiaries and step down subsidiaries.

Most companies create subsidiaries and there is nothing with just the creation of a subsidiary. It is when a firm may create an unusually high number of subsidiaries that raises suspicion.

I have also highlighted this point in another article which you may find useful. Refer point 6 in the link share below:

In majority of the cases where a fraud is reported, a large number of subsidiaries is a common occurrence.

By having a large number of subsidiaries the parent company can send money out of the company via loans and advances, investments in subsidiaries etc.

Unitech Ltd the real estate major, Cox and Kings are some companies who are reported to have engaged in this practice 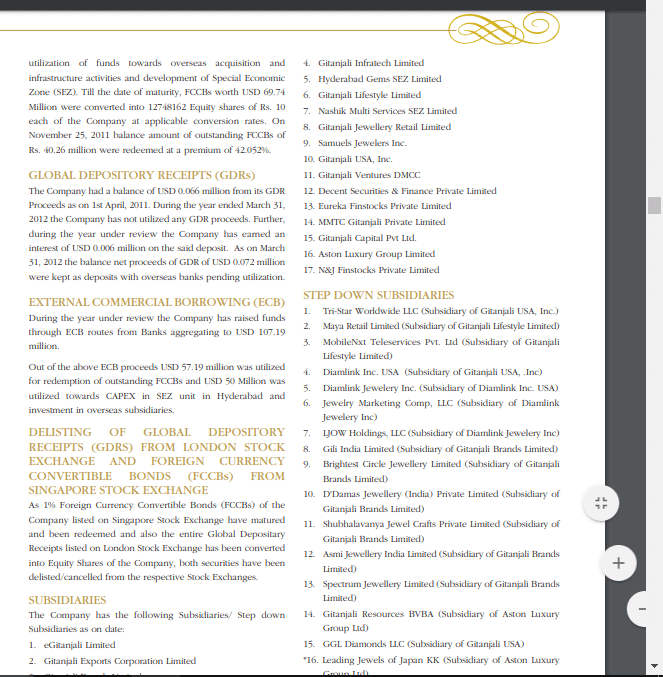 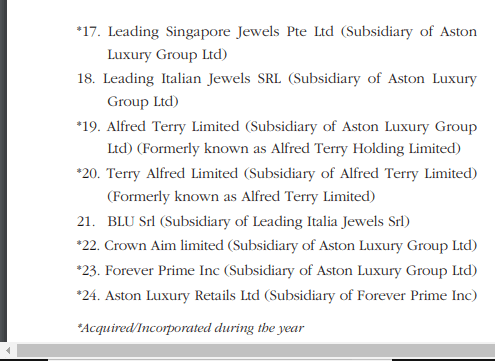 Gitanjali Gems has been extending interest free loans and advances to its subsidiary companies. This means that subsidiaries do not pay any interest to Gitanjali Gems for the loans or advances extended to them.

Below is an excerpt from 2012 annual report of Gitanjali Gems which states that company has granted unsecured loans (not backed by any collateral) of amount 1032.5 crores.

As an investor this raises suspicion on account of following factors: 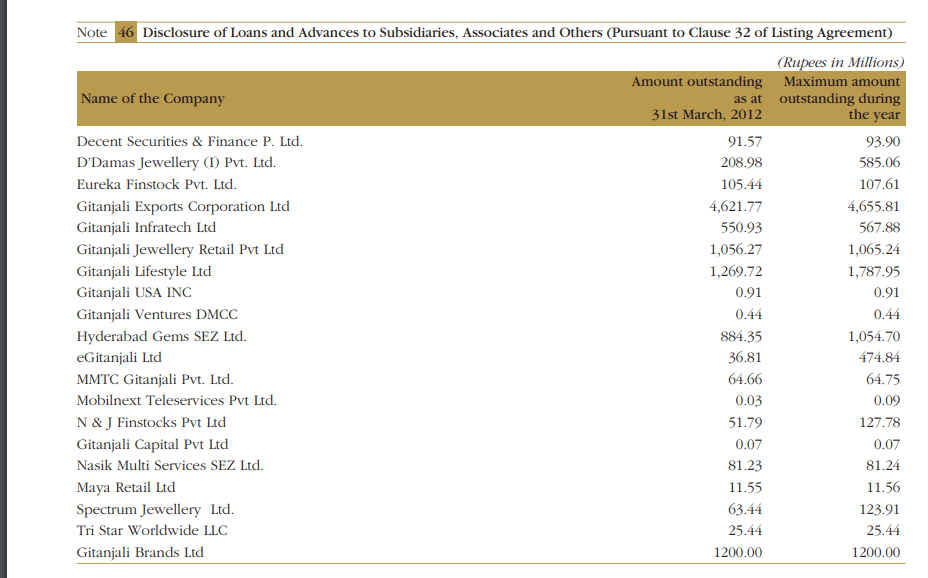 This article from ET where CBI scans balance sheets of 18 group subsidiaries of Gitanjali Gems kind of validates our thesis.

Apart from all these points there is another thing that I found fascinating about Gitanjali Gems. You can count this as bonus information.

Gitanjali Gems has a motor boat

11. Gitanjali Gems Has A Motor Boat

On page 65 of annual report of financial year 2012 you will a motor boat mentioned as one of the physical assets worth 56 lakhs after deducting for a depreciation of 91 lakhs.

Though the amount is not significant, I wonder how does a jewellery company make use of a Motor Boat? After all if its of no use to the operations of the company then it is a misuse of shareholder’s capital

An investor could have avoided investing in stock of Gitanjali Gems looking at the following parameters:

6. Corporate guarantees to subsidiaries for an amount of 2487 crores as per 2012 annual report

7. Long list of subsidiaries which includes businesses in real estate, lifestyle products to finance and securities

10. Lastly, a trivial point but kind of intriguing for me. A motor boat as a physical asset

I hope you liked the article and I wish these warning signs will save my readers from potential stock market scams like Gitanjali Gems in future.

Please share if you liked this article and don’t forget to subscribe. That’s all from my side. Happy Investing Folks.